The top illustration is a cutaway example of a German Bomb Fuze Number 17 fitted with an anti withdrawal device called a ZUS 40 it was designed to kill the person defusing the bomb.  When the fuze was removed, a small trigger in the ZUS 40 set off the bomb. The other fuze is a number 36 fitted with the same ZUS 40.

It may be a little known fact, but during WW2 the largest number of UXB's made safe by the RAF BD organisation were of British or American origin.  The fuzes in these bombs were just a dangerous as those in the enemy bombs and sometimes even more so.  This aspect of responsibility placed a heavy load on the teams at that time.

When war ended in 1945, about 84000 bombs had been dealt with in the UK and some 92000 in mainland Europe.  Of these, the majority were British and Allied weapons jettisoned in an emergency or recovered from crash sites.

After May 1945, a disarmament program began, it involved the physical disarming of the Luftwaffe and used more RAF Bomb Disposal personnel than the actual war.  Some 8000 airmen were employed of which 800 were actually qualified BD personnel. This hazardous job claimed the lives of 10 BD personnel.  Between May 1945 and June 1947 the RAF Bomb Disposal units disposed of:

By 1965, the RAF Bomb Disposal organisation had been reduced to 2 flights renamed No's 1 & 2 EOD units.  In 1967, they were absorbed into the Maintenance Units (MU's) based at 60 MU RAF Leconfield in Yorkshire and 71 MU based at RAF Bicester near Oxford.  Therefore, the last of the original BD units from 1943 were no more.  Later in 1976, the two units had become established at RAF Wittering near Stamford in Lincolnshire.  Wittering used to be the home of the RAF Harrier VTOL/STOL aircraft 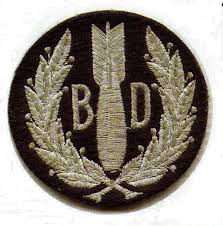 In 1940, 80 RAF Demolition Sections existed to carry out duties at the more important airfields in the UK which were called "X" (for explosive" Stations.  The equipment available was primitive to say the least and there was minimal training given in addition to the normal training tor Armament Tradesmen.

In September of the same year, the RAF Armament School had begun 5 day bomb disposal courses to teach what was known about enemy bombs and bomb fuzes,  The 80 Demolition Sections had by then been supplemented by mobile squads.  The enemy had also come further along its path of destruction and chaos.

The Luftwaffe were dropping bombs containing anti withdrawal devices, long delay mechanisms and many other ideas to try and outsmart the men who were tasked with what was one of the most unpleasant and risky jobs of the last war.  The Demolition Sections had now become RAF Bomb Disposal or RAF BD Sections.  They were also awarded the Bomb Disposal Trade badge.

On November 6th 1939, a bomb was dropped on RAF Sullom Voe (pictured here) in the Shetland Islands.  The fuze was recovered and was probably the only type that any of the existing service demolition sections or in the case of the Army, demolition teams had ever encountered.

In May 1940, the first German bomb to be dropped on Mainland Britain fell near the city of Canterbury in Kent.  It was then that the British War Office accepted responsibility for the disposal of UXB's.

The history of RAF Bomb Disposal started 75 years ago in 1939 when the threat of having unexploded enemy bombs on British soil was realised.  In the past, prior to1939, the RAF was aware that not all the bombs dropped from the air would in fact explode.

The trade badge was authorised in January 1941 by AMO A 69 to be awarded to armament technicians who were employed in the making safe and removal of unexploded bombs dropped on RAF Airfields.

Worn on the upper right sleeve, it shows a bomb in the decent flanked by the capital letters "BD" surrounded by a laurel wreath all embroidered in light blue on a circular black background patch.

Following the hostilities of the Second World War, the badge was abolished on the 1st June 1948 under AMO368.  It was reauthorized on 27th January 1949 under AMO A 92 and can be seen today worn by current members of 5131(BD) Squadron.

Between 1940 and 1943 the Air Ministry was the main controlling body for Bomb Disposal Squads.  In April 1943, a proper organisation was formed with a Wing HQ, 6 Bomb Disposal Squadrons and 29 Flights.  The Officers in charge of the squads went out with the Airmen and did the experimentation on unknown fuzes and new bombs to enable new equipment to be designed for dealing with them.

In the first 2 years of the war RAF Bomb Disposal had dealings with 1512 enemy bombs and the specialist Officers had to deal with a further 114.  All the bombs dealt with were actually dropped from aircraft.  No bombs came from crashed aircraft. 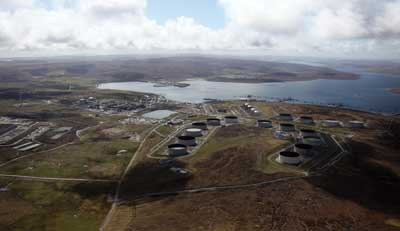