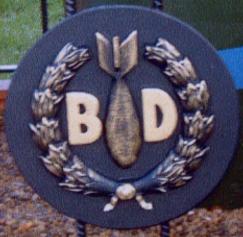 Letters of support we received from some influential people.

This group of photos shows the various stages up to the finished project.

From left to right:  The Original Concept.  The New Design.  The Finished Design Graphic 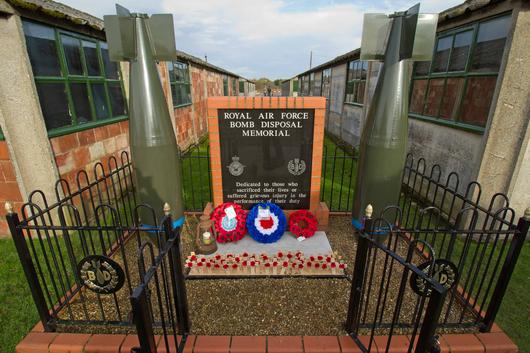 Further meetings were held with Eden Camp, the stonemason and bricklayers and an order was placed to the value of the funds. Provision was also made that should we receive further sums of money we would then move to a staged improvement of the projected memorial. Further funds would also permit a contingency should the memorial need to be moved and if any maintenance for the upkeep be required.

It was soon realised that in addition to the cost of the memorial, money would have to be available for organising the actual dedication; a book recording the contributors to the project to be placed in the camp chapel and the cost of producing a memorial edition of the club magazine. The money was forthcoming and all expenses are now fully paid.

So, there you have it! The seeds were sown. They were nurtured through hard work and determination. The result is shown here at Eden Camp. The Memorial dedicated to the men of The Royal Air Force Bomb Disposal Organisation who sacrificed their lives or suffered grievous injury in the performance of their duty.

Following this initial meeting, the organisers met for the first of many planning meetings. Fred Knox, the secretary/fundraiser was to start his campaign whilst Chris Ogden took a tour of the local stonemasons to present the design and obtain quotations. He settled on four monumental masons and requested firm quotations to enable an idea of the projected costs to be seen. RW Atkinson Monumental Masons of Malton (01653 697190) were finally chosen to carry out the work.

In the initial stages of the fundraising, many of the appeals fell on deaf ears or in the cases where we did receive a reply; it was a negative one with little general interest being shown. Indeed, our request for support to the Prime Minister resulted in the letter being passed to the then Sports Minister! As was suspected, we were turned down by the Lottery! Fred mentioned at the time "Being killed or wounded on Bomb Disposal was not as important as investigating how snowballs rolled downhill!"

The feeling of despondency set in but efforts were re-doubled and slowly the money started to come into the fund account. 34 out of 660 RAFA branches donated money and 3 serving organisations did the same. To those, we would like to record our appreciation and to those serving and private individuals who gave freely and helped put the memorial in place and on time in September 2001. Thank You

By March 2001 we had raised just over £3000 so it was decided to ballot the members again and find out whether we should go ahead for September or carry on the fundraising for another year. After the returns were in, the views were for the memorial to be in place by the Reunion in September 2001 although as was thought, some members would have preferred to raise more money. The final decision was taken with the age of the majority in mind and the ability of those older or infirm members to attend the reunion and dedication ceremony.

A plan was devised to slim down the design of the memorial. Chris Ogden and Ron Willis set about the task of producing publicity material so that the Secretary who also took on the task of fundraiser could start a wide-ranging mailing attack. The design varied quite considerably during the early stages and it caused some confusion when the publicity material was being sent to individuals in order to advertise the campaign. The decision was taken to target serving armament units, Service organisations, RAFA and Media personalities, as well as known business contacts and anyone else who might show an interest.

The Lottery Commission was approached as was the Prime Minister and other MPs. Sally Frosdick, a friend of the club also wrote to many influential people and institutions to further our cause. Her father had been in the Royal Flying Corps and Bomb Disposal during the last war and she felt she should do as much as she could to help.

From the outset, it became apparent that in view of the short time scale allowed it was not going to be easy to raise sufficient funds. The club was promised a considerable cash amount to start us off but later the offer was withdrawn and we started the project with a nil balance. It was decided, that at least during the initial fund raising drive, the first plans and ideas of the design for the memorial would be those first shown to the club by the originator and his stonemason together with some graphics from Chris Ogden our former News Editor. However, it was soon realised that the logistics and costs of this design would never be met within the projected time scale.

The organisers knew that in order for the memorial to be in position for September 2001, an initial order would have to be placed by March 2001 at the latest to give sufficient time for a stone to be inscribed etc. The original costings exceeded £7500 so the organisers were faced with a dilemma comprising of two choices. The first was to postpone the memorial for a year to enable the money to be raised over a longer time span. The second was to make a cut off date of March 2001 and order a memorial to the value of the money raised at that time. The decision was not considered one to be made solely by the organisers so a ballot was made to the members of the club for them to decide what was to happen. After all, the memorial was a club project and the wishes of the members were paramount.

After the ballot, and considering the age of the majority of the club it was decided that although some members were happy with the original plans, the practicalities of paying for it were the main criteria in making the decision of re-designing the memorial to fit the fund.

At the Annual Reunion in 2000, Jim Jenkinson, a member of the Ex RAF Bomb Disposal Club, suggested the original idea for a memorial to the personnel of the RAF Bomb Disposal Organisation. He made initial approaches to a local stonemason and other members of the club. He also investigated ways of raising the money to fund the memorial project. When it became clear how difficult a task it might be, the club at the AGM and Annual Reunion officially adopted the project in 2000. Sadly, Jim was too ill to attend the dedication at Eden Camp in September 2001 and died in January 2002 of Cancer.