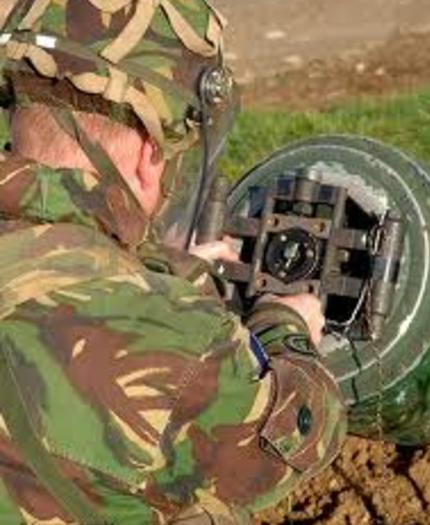 The Rocket Wrench is a robust high torque wrench developed for the UK MOD for Bomb Disposal Engineers as a means of unscrewing fuzes from unexploded bombs at a safe distance.  It is powered by 2 x 0.5 inch calibre electrically initiated power cartridges which when fired simultaneously will turn the wrench like a Catherine wheel and unscrew the bomb pistol or fuze.  The picture shows the Rocket Wrench being attached to a bomb fuze by an EOD technician. 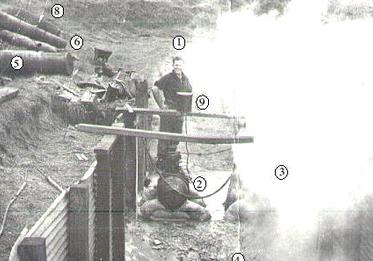 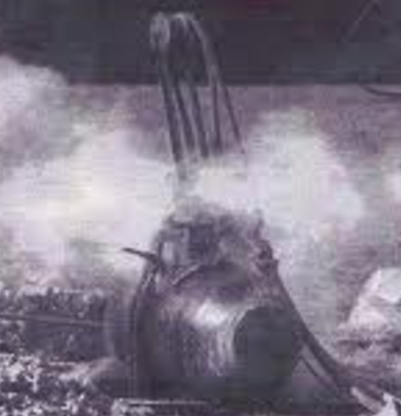 A platform mounted on 2 wheels covered in chequer plate sheeting to form a platform that was non slip and a tow bar for transportation.  The platform had 4 adjustable folding legs for levelling.  Bolted to the nearside of the platform was a JAP 2 stroke engine to drive the water and steam pumps.  Water is pumped from a large tank and through a copper coil heated by a paraffin heater a bit like a blowlamp but bigger.

The heating of the water in the coil produces steam under pressure.  An armoured hose is attached to the coil to deliver the steam to the previously trepanned bomb.

The steam generator must be watched in case "Blue Steam" is produced.  Blue steam is thin and bluish in colour and is an indication of lack of water and overheating of the copper coil.  The correct steam is a thick cloud with plenty of moisture as shown in this picture of Danny Kigariff in the 1950's.

The introduction of the Pass Trepanner was very much welcomed by all RAF Bomb Disposal units.  With the use of this equipment, a 41/8 inch hole could be cut into the bomb casing of most German bombs fro 250Kg upwards.  Apart from fitting the trepanner to the bomb, the operation was carried out at a safe distance by remote control.  The hole could be cut directly over the fuze itself or anywhere on the casing, usually near the rear of the bomb where the case was thinner.  After the hole was cut, the operation of "Steaming Out" could commence.

The trepanner was in 2 parts, the base and the trepanner cutting head.  The bomb was raised a few inches of the ground and wedged to prevent movement.  The trepanner was then attached using adjustable chains and bolts.  Cutting fluid of the type used on lathes or milling machines was used to cool the cutter and prevent overheating.  Once the cutter was cutting all round the cutting indicator needle stays steady instead of waving back and forth.  Once the cutter is through the case the needle drops to zero and remains steady.  Everything is then switched off and the trepanner removed. 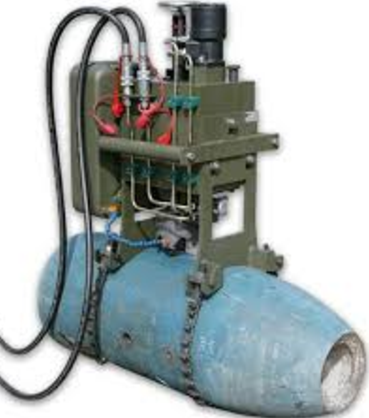 How the Stevens Stopper operated:

A flat circular metal band about 2 feet in circumference, 2 inches wide and 3/16ths of an inch thick had 3 metal stays 30 inches high which formed a cone connected to a small metal platform to which a vacuum pump was attached.  The pump had a gauge fitted to a connector outlet on the pump body.  A 5/8th inch rubber tube was connected to the outlet with a jubilee clip.  4 feet along the rubber tube a single bar tap is fitted known as tap "A".  18 inches from this tap a tee piece is fitted.  On the right angle bit of the tee, another 12 inches of rubber tube is fitted to which another bar tap is also fitted known as tap "B".  A further 18 inches of rubber tube is fitted to the tap and inserted into a jar containing 15 fluid ounces of immunising liquid. To the other end of the tee, 3 feet of rubber tube connected to a bronze collet with a rubber washer to fit on the fuze head.

With tap "A" ON and tap "B" OFF the operator stands on the metal ring to stabilise the vacuum pump and with vigorous up and down strokes of the handle evacuates the air from the fuze pocket.  When the needle on the gauge reaches a black marked area and is holding steady, the immunising operation can proceed.  Should the needle start to fall then a leak is occuriong and this must be rectified before anything else can be done. 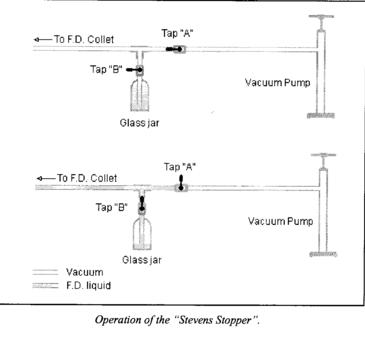 The RAFBD Boss throughout the war was Wing Commander J Stevens.  He invented a device called the "Stevens Stopper"  A device to introduce a fluid into a ticking type 17, 17A or 17B bomb fuze which could stop the mechanism and render it unable to start again regardless of vibrations or movement.

The method used was to first evacuate all the air from the fuze pocket in the bomb and then introduce a suitable resinous liquid into the fuze pocket under vacuum pressure to ensure penetration into the mechanism of the fuze thus jamming up the works.  Very effective and very simple. 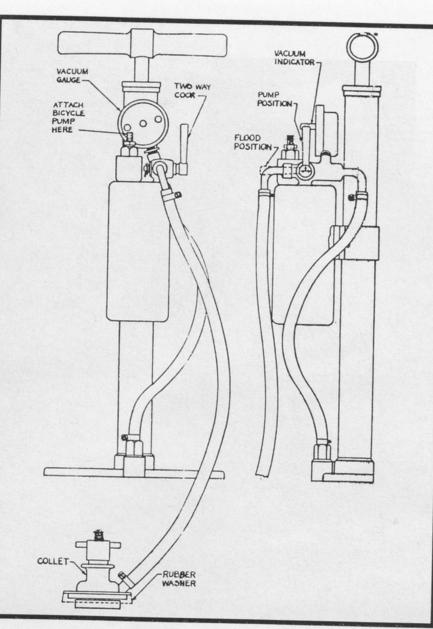 A description of an effective but simple device.